Anyone following the #ihdos hashtag and any member of my PLN would tell you, I was tweeting non-stop at the IH DOS conference last week, so much so that I was later asked the question, ‘When you tweet, do you miss things that are being said?’

My answer was a confident ‘no’. In fact, when I tweet, I find myself paying more attention to what the presenter’s are saying. It’s almost like the tweeting gives me a motivation to really understand and summarise the speaker’s message. Tweeting, to me, is like taking notes – taking notes in the form of tweets – notes that I can then look back on several days after the conference and write a reflective blogppost about – a reflective blogpost like this one.

The conference started off with an encouraging and bonding talk by Lucy Horsefield and Monica Green about the core values of the IH brand and what we stand for, while Sophie Montagne introduced the very eye-catching IHWO website and announced IH Prague’s role in hosting this year’s YL conference. Shaun Wilden then continued to fly the IH flag, talking about the IH World Assessment unit, outlining a continual professional development scheme for IH teachers, including the blog ihteachers.com that could allow us to collaborate and get together in a way we’ve never been able to, and reminding us of the impending pub quiz the following evening.

After a much needed coffee break that saw old friends saying hello and new introductions being made, Neil McMahon was streamed into the conference room live from Argentina using the impressive Blackboard software. As Neil briefed us on the different IHWO resources available this year, such as the up and coming IH Live online workshops planned for March and November, the IH Language Rainbow, and IH teacher liaisors to facilitate teacher collaboration, Shaun deftly multi-tasks and ensures the smooth and successful video streaming with skills of an IT guru.

Following up on Neil’s talk about teaching resources, Trevor Udberg (IH Newcastle) shares his project, the IH Platform with great passion and finesse, encouraging schools and teachers to make use of online blogs to create a sharing philosophy. Outlining the advantages of sharing, Trevor states that sharing allows us to create a sense of belonging, to show off the great work our teachers are producing, to cherry pick from a wider range of resources, and help smaller schools to benefit. While acknowledging the fact that some teachers might be saving their materials in hope of a future publication, in a digital age where blogging and tweeting is becoming commonplace, Trevor has hit the nail on the head when he says that sharing can conversely help promote your work and get you that publishing deal you are waiting for.  A motto that is definitely worth repeating outside of the IH schools : Let’s Share!

From this point on, the conference branched out of IHWO-relevant topics into broader themes of interest to most TEFL teachers. One key track on the conference was the focus on the use of social networks and technology, starting with Shaun Wilden’s very energetic presentation. While providing a useful overview of what Twitter is, how it works, and what it can do for a teacher’s continual professional development, Shaun’s talk lived up to its title ‘What has #hashtagging ever done for us?’ by exemplifying the uses and advantages of hashtagging with the award-winning #ELTchat, Dave Dodgson’s blog challenge, and the international success of the recent TESOL France organized by Bethany Cagnol. 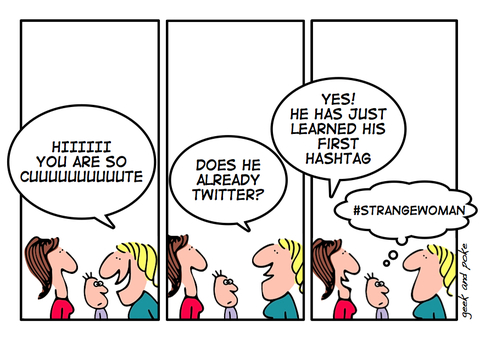 The talk was echoed and expanded upon by Emma Cresswell (IH San Isidro) who systematically looked at the pros and cons of using social media like Facebook, Twitter, and LinkedIn both for use in the classroom with learners and as a marketing and publicity tool for the school to target potential students and maintain existing ones. Giving examples that ranged from using games on Facebook to motivate students to using social media to keep in touch with students, to share information and  to open up channels of communication between students outside the classroom, Emma clearly convinced some of the DOSes in the room to consider the usefulness of social networking on digital media.

In a plenary talk the following day, Nicky Hockly debunks the myth of the digital natives in the most creative way by getting the audience to consider the tree octopus, successfully rallying support for saving it from extinction, only to reveal that a closer genre analysis of the ‘Save the Tree Octopus’ website shows it up to be false, much to most of our disappointment (I was ready to download that tree octopus ribbon and put it up on my blog!). Pointing out that our younger students, despite being labeled ‘digital native’, still need to be taught how to deal with media literacy, Nicky provides ways of conceptualizing digital literacies based on Mark Pegrum’s categories, focusing on language, information, design and connections.

Nicky then goes on to share some exciting ideas of using literal videos like the Harry Potter trailer together with the online subtitling tools such as overstream.net to help students create stories and have fun with putting words to scenes from foreign films like the Downfall.

Another thread that took on more significance as the conference progressed, attracted the attention of teachers following the conference on Twitter and has seemed to acquired a life of its own in Blogosphere after the conference ended is the Dogme versus Coursebook debate. Alastair Grant kicks off the debate on Day One of the conference with his talk ‘Dogme Teaching in your institute’, providing a useful definition of Dogme, outlining the three principles of Dogme (materials light, conversation driven, emergent language) and showing that the collocation ‘a Dogme Syllabus’ does not have to be an oxymoron, while describing how he implements Dogme with his class over a whole term.

Starting with what Alastair called ‘Pedagogical Foreplay’ (and the rest of the ELT world calls a Needs Analysis), he uses a questionnaire at the beginning of his course to focus his students on their goals, their interests and the things that they can bring to the classroom. Convincingly demonstrating how listening, writing and reading skills can still receive their deserved focus by getting students to bring in texts, songs, genres which they are interested in and would like to work on, Alastair shows the audience a bingo-style grammar syllabus which he ticks off as each topic/language item is uncovered in a Dogme lesson. In order to add structure to the lessons, Alastair emphasizes the importance of getting students to keep lesson diaries – a written record of everything covered in the classroom. Result? Increased student motivation, a keenness for students to speak more, making the students integral to the construction of the course, a higher attendance rate, and higher levels of excitement all round!

The following morning featured the debate everyone had been waiting for, the Dogme battle where Jeremy Harmer and Luke Meddings went head to head, while the entire Twitter community held their breaths and tweeted madly (Okay, that was really mostly my Dogme PLNers…but there were still quite a lot of tweets!)

Jeremy starts off by comparing language learning to the decontextualized rote learning of music and begins to deconstruct each of the three ‘pillars’ of Dogme (Hey, we did have 10 vows of chastity before…so going down to 3 only demonstrates the flexibility and adaptability of Dogmeticians!). First, Jeremy asks if coursebook-based lessons could be conversation-driven too, then  proceeds to question if conversation-driven lessons are necessarily better, stating that Dogme perhaps neglects learners who are not people-smart and do not function well in interactions, preferring to get their knowledge in other ways. Just like the fact that some people actually do like packaged holidays, Jeremy compares that to people who do like coursebooks, and claims that some of the stuff found in coursebooks can actually be very interesting. 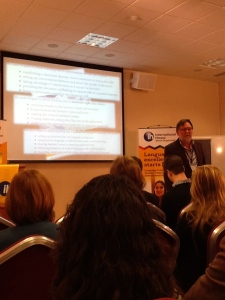 Jeremy then goes on to agree with that Dogme moments where teachers work with what students want to talk about can constitute good teaching, but asks the all important question: What if language does not emerge?

(As a Dogmetician, I worry that the term ‘emergent language’ might have been misunderstood here. Perhaps there is a need to define emergent language further here. I doubt if we are referring to the procedural knowledge students have or the language that is ready to be proceduralised in the minds of the learners. We are referring the output that students produce, within which there is always incidental language we can work with, providing the output + 1 or O+1…sorry, Krashen).

This all led to a mad flurry on Twitter, with tweets such as, ‘It’s not Dogme, it’s what teachers have always done,’ and ‘what if we just call Dogme good teaching?’  and a comment that some Dogmeticians are rather evangelical…

(Yeah, coz if you ain’t doin Dogme-style, you ain’t teachin! Hallelujah!)

Luke Meddings enters the boxing ring straight after Jeremy, highlighting the importance of motivation and relevance for language learning, reminding us that there are teachers out there who do not necessarily adapt the coursebooks and use them in a personalized way, teachers who use materials that aren’t even engaging them, teachers who do stuff just because it’s in the book.

Equating grammar exercises and countless gap-fills to slapping on too much Coleman’s mustard and never using all of it, Luke tells of Dale Coulter’s anecdote of his student, an education specialist, who flicked through the coursebook and said, ‘This is a linear syllabus disguised as a series of thematic units. But that’s not how the brain works!’ Funny how we can wax lyrical about how language learning is not linear and preach Krashen’s i + 1 and SLA theories about interaction and meaning negotiation for decades, yet still resist the idea that grammar/chapter McNuggets of coursebooks might not be the way to go.

Luke emphasizes that our students are coming to us with their English which we should be working with, and not for our English, and that materials-light therefore enables teachers to approach the class in a top-down rather than bottom-up fashion. Dogme lessons are therefore not one-off lessons that constitutes of the teacher winging it because they couldn’t be bothered to spend time pre-planning, but requires teachers to rigorously react on the spot, focusing on grammar, doing little drills and offering practice of a language point that has emerged. The time spent on pre-planning is instead used on post-teaching reflection which not only allows the teacher to evaluate what and how the emergent language has been focused on and the skills that has been practised, but also provides the teacher with opportunities to consider how they would review, recycle and reinforce what they have covered in the following lessons, providing for continuity throughout the course.

While maintaining that unplugging your lesson does not necessarily mean pulling the plug right out and that the amount to which you ‘unplug’ could be varied, the focus is on removing restrictions and being independent, creative and truly communicative.

Using the rule ‘Play Pause Play’ (another definition of PPP?), Luke shows how Dogme can also cater to the Ectenic learners who like systematicity and control of their learning by directing the focus on the emergent language in the ‘Pause’ stage of the lesson, while still providing for the Synoptic learners who prefer to go with the flow and just focus on fluency through the ‘Play’ parts of the lesson.

The success of this debate can be clearly seen by the fact that countless blogposts have been written since the conference discussing unplugged teaching. See below for some of them.

So, would anyone still think that I don’t pay attention when I tweet during conferences? ; )