Due to popular demand, here’s a picture of my boardwork to start with.

See if you can guess how the lesson unfolded! 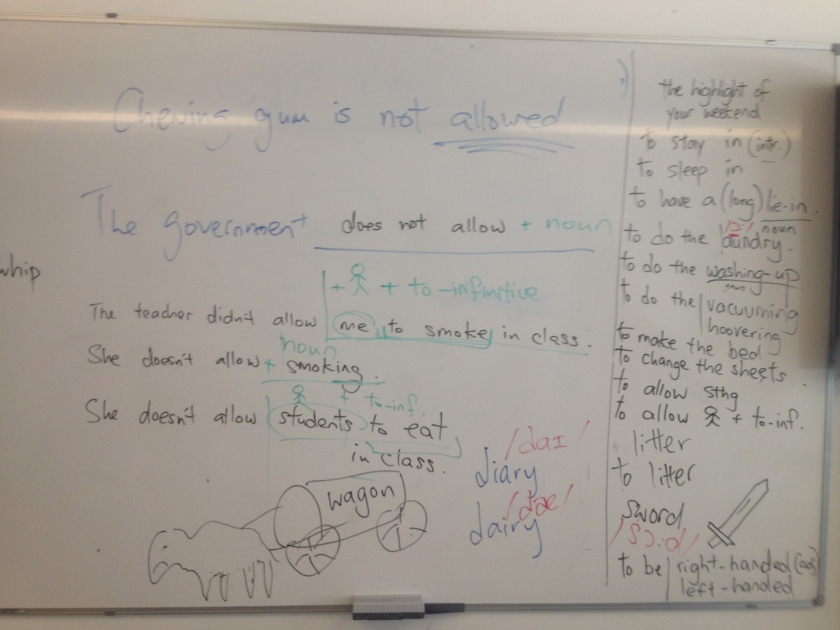 This Monday started off like many other Mondays. Everyone had a lie-in on Sunday, everyone couldn’t get to sleep on Sunday night, and everyone feels fatigued on Monday morning.

I walked into a class of quiet and tired-looking students and started the day by asking them what they did over the weekend. One student revealed that he had gone to Bournemouth, while another said she went shopping in Westfield. Sensing that the students were indeed keen on talking about what they did over the weekend (and not just groaning because yet another teacher is asking them the same question), I handed it over to them and had them telling each other about their weekends in groups of three.

Ranging from walks in the park to dinner with mates, many of the students seemed to have had an interesting weekend. One student then said he stayed home over the weekend and read books in English…everyone was quite impressed. Scaffolding the language output, I fed in the phrasal verb ‘stay in’, as in ‘I stayed in all weekend’, and then realized I needed to clarify the grammar of the phrasal verb.

In the tradition of guided discovery/ consciousness-raising, I wrote the following up on the board.

I then asked to students to note the similarities and differences between the two categories. In pairs, students decide that both categories contain phrasal verbs, and define phrasal verbs to each other. They then figure out that the first group of sentences took an object while the second group does not.

In order to introduce the grammatical labels for these phrasal verbs, I elicit from students words starting with ‘trans’.

Students come up with ‘transport’, ‘transmit’, ‘transgender’ (yes, a student did say this), ‘translate’, etc.

I then asked students what they thought ‘trans’ means.

They suggest ‘change’ and ‘movement’.

I then tell students that the group of phrasal above that take an object are called ‘transitive phrasal verbs’ because the action moves/transfers from the verb to an object.

I then elicit that the groups of phrasal verbs that do not take any object are ‘intransitive’.

To ensure, that they were clear, I asked the following concept questions:

Can I say, ‘We stayed in on Saturday night’? (yes)

I had thought it would be harder for the students, but they unanimously said ‘no’ to the second question and seemed clear that ‘in a restaurant’ was an adverbial of place, and that ‘in’ did not belong to the verb ‘ate’, as in ‘ate in’.

I then drew attention to the group of transitive phrasal verbs, and asked for the difference between the first two and the last sentence of that group.

After discussing with their partner, they decided that the phrasal verb in the last sentence was separated and the object was what separated the two verbs.

I asked which of the first two phrasal verbs could also be separated, and students very quickly decide on the second, after realizing ‘I looked the cat after’ simply sounded wrong.

I asked, ‘What about the second group? The intransitive verbs? Which of them are separable?’

This was obviously a trick question, and as students began discussing with their groups, some of them started laughing, and in open class feedback exclaimed, ‘If there is no object, how can the object separate the phrasal verbs?’

Seeing that chance to check up on the students’ dictionary skills has presented itself so neatly, I asked the students, ‘So, if you see a phrasal verb like ‘eat in’, how do you normally check for meaning and usage?’

I got students to show me what they could find and so students fished out their digital translators and/or activated their iPhone apps. Many admitted to using bilingual dictionaries, but many were not able to find a satisfactory example sentence or tips to its usage. Some were even not able to find the phrasal verb ‘eat in’ and were simply given the definition of ‘eat’.

We discussed the pros of using a monolingual dictionary at the level of their studies, and the crucial features a dictionary should contain, and I showed them the 4 possible ways a dictionary might attempt to indicate if a verb is transitive or intransitive.

switch the light on

Making a mental note to bring some dictionaries into class tomorrow to practice their dictionary and note-taking skills, I move the topic on to lexical notebooks and highlighted the usefulness of students having a separate lexical notebook at home which is categorized by topics or by alphabetical order.

Spending 10 minutes everyday transferring the lexis one learns in class into their lexical notebook at home is not only a great way to organise new lexis in an easily retrievable way, but is also a great tool for students to revise and consolidate the day’s learning, while raising questions about language items that students either had forgotten or are not sure about, so that they can ask the teacher in class the next day.

As I brought back the example sentence ‘Student C stayed in all weekend’, another student started asking, ‘Is that the same as “to have a lie-in”?’

We first clarified the difference in meaning between the two, but as we moved to form, we quickly realized that ‘a lie-in’ is a phrasal verb that has been made a noun (with the use of the hyphen) and that the phrasal verb ‘to lie in’ is not as often used.

We looked at the example ‘My boyfriend and I broke up’ and created the noun ‘a breakup’, as in ‘She was very upset about the horrible breakup’, before I reminded them of a phrasal verb they learnt last week that was made into a noun (I put my ‘leftovers’ in the fridge).

We then looked at other things that students did over the weekend, and Student A said that she was washing clothes. I elicited the expression ‘to do the laundry’, and then asked if any other students did any housework this weekend.  Several lexis regarding household chores started to appear, and after a short list was compiled, I decided to get students using the lexical items regarding the details of their weekend.

Putting the chairs in a circle, but deliberately leaving my own out, I stood in the middle of the circle and said, ‘If you did the laundry this weekend, please change seats’.

If you are reading this, you are most likely a TEFL teacher.

And if you are a TEFL teacher, you know how this goes. (groan, sign, mutter…)

But the students weren’t TEFL teachers, and found this activity utterly new and amusing, and we went on for about a good 10 to 15 minutes doing this amidst lots of giggles and laughter.

After our 15-minute break, we came back for a revision of the entire week. I gave the class about 10 minutes to review their notes and recall the week in pairs, and then distributed the mini-whiteboards, one per group.

I then proceeded to describe, explain or use the word in context, and students could negotiate with their partners before writing the lexical item on the board.

Through the revision process, several phrases and structures that students had doubts about were clarified, and I occasionally allowed students to fill the gaps with more than one answer, giving a point to each correct answer.

I accepted the answers ‘banned’, ‘prohibited’, ‘forbidden’ and ‘not allowed’.

I elicited that the sentence was in the passive voice and so the answer had to be a past participle.

However, seeing the negative in the option ‘not allowed’, I had a nagging feeling that students would not be too sure how that would work in the active voice.

Quite a few students wrote,

‘The government does not allow to have chewing gum in Singapore’,

and I realized that their difficulty was not the formation of the negative of the active verb ‘allow’, but the verb structure of ‘allow’ itself.

The teacher didn’t allow me to smoke in class.

She doesn’t allow students to eat in class.

Students deduce that ‘allow’ is either followed by a noun, or by ‘sby + to-infinitive’, and so decide that the sentence should either read,

After our competitive bout of reviewing the week’s language items, we continued talking about the question students had last week about moving on the left of escalators in the London underground and driving on the left.

Some of the students had gone home to look up the reasons for driving on the left in the UK and had stories to tell. I put them in three groups of three (there were nine students in class today) and had those who had done some research telling the others. I then labelled the students of each group A, B and C, and had them sit with the others of with the same letter, thus changing their partnerships (yes, yes, you already know this because you are a TEFL teacher…), and then had the students recounting the stories that they had heard, all the time feeding in lexis and correcting students when necessary.

It was one of those days when you realize it’s 12 noon, but you really wish you had an extra half an hour with them…