Yesterday, I had to teach with the coursebook.

Today, Varinder Unlu’s had to teach with pure Dogme.

Click here if you need a refresher on what’s happened till now.

Meanwhile, let me hand you over to Varinder…

Sticking the original rules set out by both Chia and myself, today I had to teach a Dogme lesson.  The day started with me feeling quite exhausted as I had done CELTA input on Tuesday evening and didn’t finish work until 21.30 and had spent the day dealing with day to day running of the General English department.  But I was not going to let tiredness stop me from fulfilling my duties. 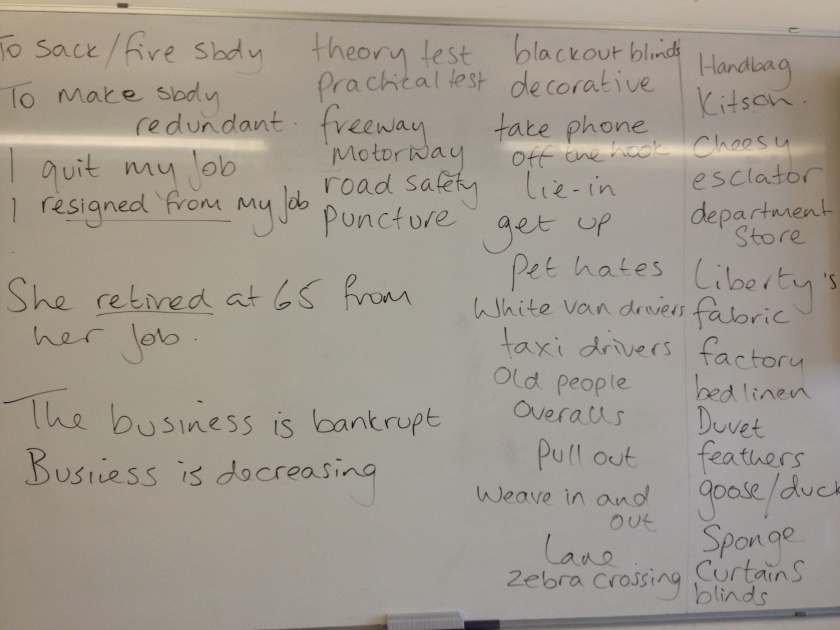 The lesson – as much as I can recall:

I started by collecting some dictionaries and a set of mini white boards for a vocabulary revision activity I was thinking about doing with the class in the 45 minutes of the lesson.

As I entered the room, four students were already there.  We greeted each other and then one of the students approached me with his CV and explained that he had been invited to an interview for a job and they wanted him to send them his CV in English.  He asked if I could have a look at it and see if was ok.  As I was going through his CV , other students started arriving and one of the Japanese students asked me what was happening.  I explained that I was checking a CV at which he became very excited and asked me if I could do the same for him.  I told him to bring it in tomorrow and we would look at it tomorrow.  This all happened before 9 o’clock.

I started the class by asking students what they did yesterday after the lesson.  One student said he had gone to Harrods.  The conversation about Harrods became about how expensive it is and one student said that he thought people had to pay £5 to use the toilets there.  I could not tell the student if this was true or false as I have never been to Harrods!! The other students were also not sure if this was true or not.  We moved on to what the student bought from there and he said he had bought a handbag for his mother.  We talked about different departments in the store and then one student mentioned the shrine in memory of Princess Diana and Dodi al Fayed which is in one part of Harrods.  She said it was kitsch and the other students wanted to know what this meant.  I asked her to explain and she tried by saying “it’s the opposite of elegant”.  We tried to explain with some examples and I said “cheesy”.  This is a difficult word to explain unless there are some visuals and I would normally bring up a picture on the IWB to show meaning but the IWB hasn’t been working all week.  I don’t think I did a very good job of explaining.

Then the conversation changed as one student started talking about another big shop on Carnaby Street, near Oxford Street.  I actually didn’t know what he was talking about and it took quite a while before someone said “Liberty’s”.  I’ve heard of the store but have never been there either and did not actually know where it is. (I’m not a fan of big shops and department stores and generally keep away from them).  The students obviously know where these shops are as they are not only students but are also tourists.  The student said he likes the fabric at Liberty’s and I asked the class if they knew what “fabric” is and one student said “a place for producing things”  – he was obviously thinking about “factory”. I clarified that fabric here did not mean factory and other members of the class told him what it was by pointing to their clothes and saying clothes.  This moved us onto what else fabric can be used for and language emerging: sheets, pillowcase, duvet cover, blackout blinds, curtains, sponge, feathers, cotton, lie-in, get up.  From a description of duvet the conversation went onto one student talking about how he likes to get up late on a Sunday morning , have a large breakfast, read a newspaper.  We spoke briefly about lie-in and how many people liked to do this on a Sunday morning.  I said that I don’t like to lie-in on a Sunday and get up at 6 and one student said that’s when he’s usually coming back from a party or nightclub.

Here I thought the conversation was starting to (panic on my behalf?) so I started talking about someone I’d seen on the train this morning who was being selfish.  I said rude people were a pet hate of mine and tried to get students to talk about pet hates which did not happen.  The conversation somehow ended up being about driving and different kinds of drivers, passing tests and getting points on licences.  We discussed that in the students’ countries people have to re-take their tests after a year or five years.  I eventually put the students into pairs and asked them to tell each what happens when they take a driving test.  I then changed the pairings and asked the students to explain what they had learned from their previous partner. There are two students who do not drive and one of them was clearly bored with the subject and did not really want to talk about driving and anything related to it.

As students were working in pairs I monitored and helped when they needed me with language or clarification and I also noted down errors and new lexis.  After the pair work I tried to move onto the error correction slot but ended up explaining cut off in great detail to students because they asked different questions about its uses.

After the break I put the class into two groups and each group had to choose 10 words from the last week.  Each student had two words each and they had to write three definitions with only one being the correct definition and the other two being false.  The students worked in their groups to choose their words and then divided them up. I monitored and helped.  When they had finished writing their definitions, I gave the students a mini whiteboard each and explained that each person from the teams will read their word and the three definitions and the opposing team had to write down A, B or C depending on which definition they thought was correct.  We played this game until the end of the lesson.

In my own opinion this lesson, apart from the final activity was not a good lesson.  The board was covered in loads of lexis, similar to what I’ve seen in Dogme lessons (not only Chia’s, I might add) and it left me thinking about how much the learners would retain from this lesson.  Of course if I was to continue teaching in this way I would revisit the language in the next lesson to consolidate but in my feeling is that it was far too much.  I’m also not a fan of going into grammar terminology with students and like to keep things simple.

I also felt bad about the students who had no interest in driving and didn’t really want to talk about this topic.

I don’t think my learners went away with much knowledge of anything new and it left me feeling rather depressed.  I hate it when I know that my lesson has been pants and not much learning was taking place.  We went from one topic to another and covered about six in total because that’s where the students were taking them, I had follow.  I couldn’t actually remember much of the lesson afterwards and had to really think about what happened.  The above account is not entirely accurate as I still can’t remember some of the stages.  This could be down to number of factors – general tiredness on my part or just too many things happening in the classroom.  I think I’m my own biggest critic and am honest enough to know when lesson was not as good as I would like it to be.

Overall opinion: not a successful lesson which left me feeling disappointed with the learning outcomes and very thirsty (TTT very high).  Teacher-led, teacher focused, not catering to everyone’s learning styles and needs.